[Reading] (Sushi no
Yashiro)[How to read] (susa no) yashiro

[Reading] (How
toread] (susa no kami no yashiro)

Jindai
Shrinks are very old, from the days when the gods durable
And the Death Is Still Going on

It is said that it was enshrined in Mt. Miyao in the north in old times, and it was transferred to the present place in tencho period (824-834).
It is the shrine of the clan god of "Susa clan" in the main shrine of "Susanoo no mikoto". 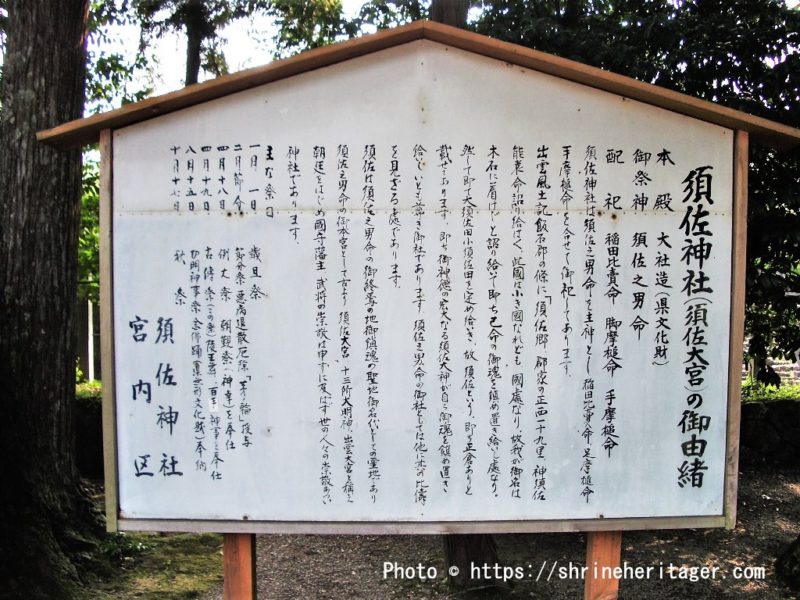 In the old days, The Village of Susa was a mountain that grew, and it was only a cold village with a cat's forehead arable place in the river.

It is seen in the old book that Susanoo's life pioneered the country, it came to the land of Susa, it was done, and the last national land management was done, and "This country becomes a small and both good country, and my name is not put on the plant, and it puts it on the land without putting my name on the plant" and it is said in the old book that It is Susana because it was decided.

The degree of the god virtue is done by the one which prays for the healing of various trouble retreat diseases, the 恢 of the mental confusion, and the nature which comes as land continuation comparatively without the inconvenience of the traffic though it depends on the favor of The Great God, and the success of agriculture, the safety of the traffic, the development of the animal husbandry, the prosperity of the descendant, and the connection of the good relation are prayed for the healing of various troubles and retreat diseases.

To spare, Because Susa's Omiya was a place of the swallowing at all costs, negotiation with the center, little contact, it is not known that it must be known, and the thing to be honored changes as it is,

It is clear even if it illuminates various events that a sufficient treatment was never done compared with the shrine of the other country and the Susa kunizo family even if the reverence of the national guard was obtained in the age, and it is a place where it is thought that it is equally regrettable of the later person.

To add to the Susa family, it was 1800 years ago (160) in the 30th year of Emperor Seiji at the time of the 24th Masusei Giuji that the Susa Omiya family was successful in land development and was the descendant of the national god.

He claimed to be Taro Izumo and Jiro Izumo, but he has been in his 78th and 2640 years as Untaro and Unjiro in the generations, except for the characters that came out only to Kuniji Izumo (1434). Mr. Kenji is now Untaro.

[Sakaigaisha] (Shrine is off site) 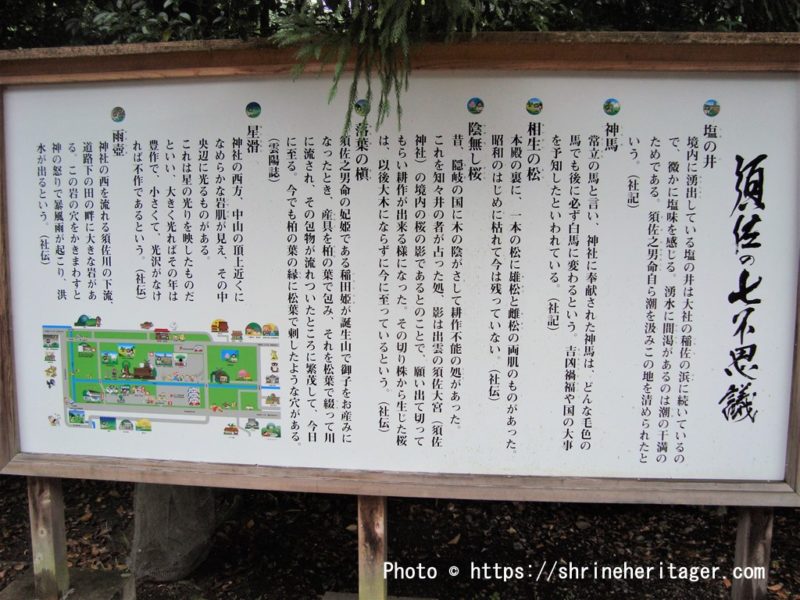 Shionoi (shio no i) that springs out in front of the head office is following the beach of Inasa of Izumo Taisha, so I feel a little salty at high tide when the tide is transmitted to the ground near the top.
Susanoo no mikoto draws the tide himself and cleanses this place. 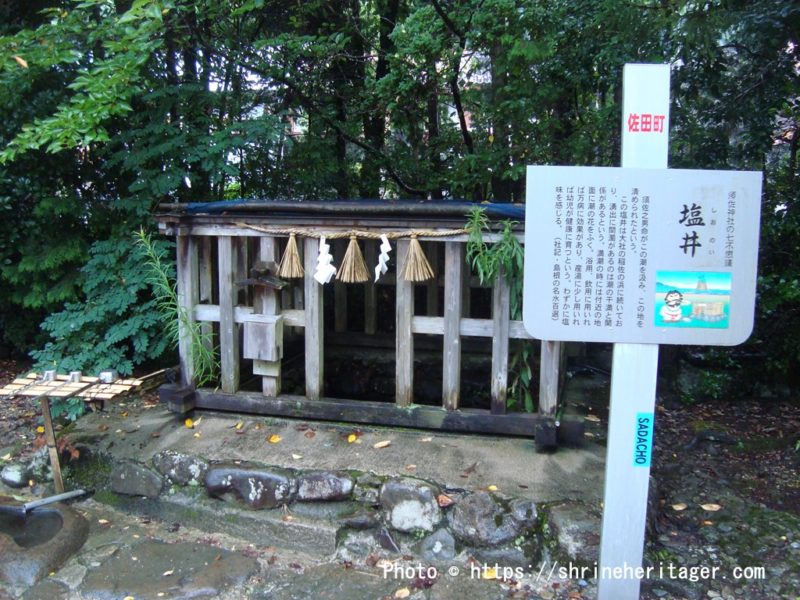 On the back of the main shrine, there was a pine tree with both male pine and female pine skin, but this large tree withered at the beginning of the Showa era, and now a replacement pine tree is planted.

When the princess god of "Susanoo no mikoto" gave birth to her child at Mt. Inashikoyama (birth mountain), she wrapped the maternity equipment with the leaves of the rose and poured it in the river, and the pine tree was still grown in the place where the package flowed. It is said that there is a hole like the stick with the pine needle on the edge of the leaf of the persimmon.

This ancient affair became the sacred crest "Vine", of Susa Shrine after posterity, and the vine seems to have patterned the pine needles, and it is assumed that it is the origin of the family crest of the Susa family.

A long time ago, in the land of Oki, the sun was covered and the poor work of the koda continued.
"The big cherry blossoms of Susa Omiya in Izumo are flourishing, and there is a poor work of koda in order to shade Oki, and it is good if it crosses to Izumo early, and it asks The Kokuzo of Susan, and the cherry tree is cut by saying that the cherry tree was cut.

But since then, when the bud comes out of the stump and the flower finally comes to bloom, it dies again, and it does not wither, and it has reached today.
I'm sure you said that's about the prayer of the five grains.

West of the shrine Near the top of the Nakayama in Susa, there is an exposure of rock, a smooth rock surface is visible, and there is something shining in the center, and it is said that this is the one reflecting the light of the star, and if it shines greatly, it is said that the year is a rich year, it is small, and if there is no gloss, it is transmitted that it is poor.

Downstream of Susagawa flowing to the west of the shrine There is a big rock on the banks of the rice field below the road below its Itsukushima Shrine, which is said to cause floods in touch with the wrath of Susa-Ogami if you stir a hole in the rock where the lawn grows with a diameter of 2 shaku (70 cm) in it.

In fact, it is reported that there is a fact that this was actually committed, it became a storm the next day, floods went out, the anger of the villagers, and was expelled from the village.

About 28km to Tachikuekyo via R184 from Hikawa IC on San'in Road to Jr Izumo City Station About 35 minutes
About 16km from Izumo and K.I. on The Asayama Road 25 minutes by car

When you cross Susa- sagawa, you sit there.
The parking lot is next to the precincts at the end of the torii gate. 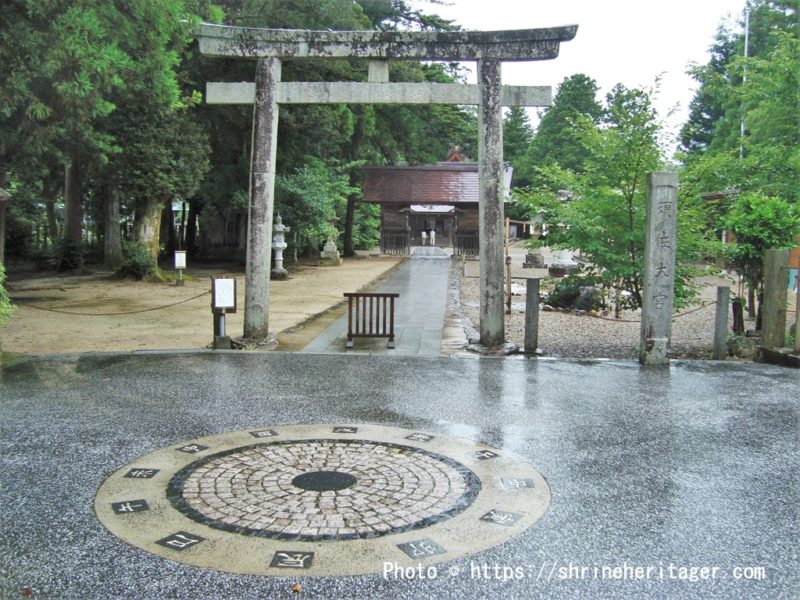 In front of the torii gate, for some reason, the "compass" is embedded in the road, so you can see which direction the company is located and how it is located.
There is a company name mark beside the torii gate, and it is engraved with "Susa Omiya". 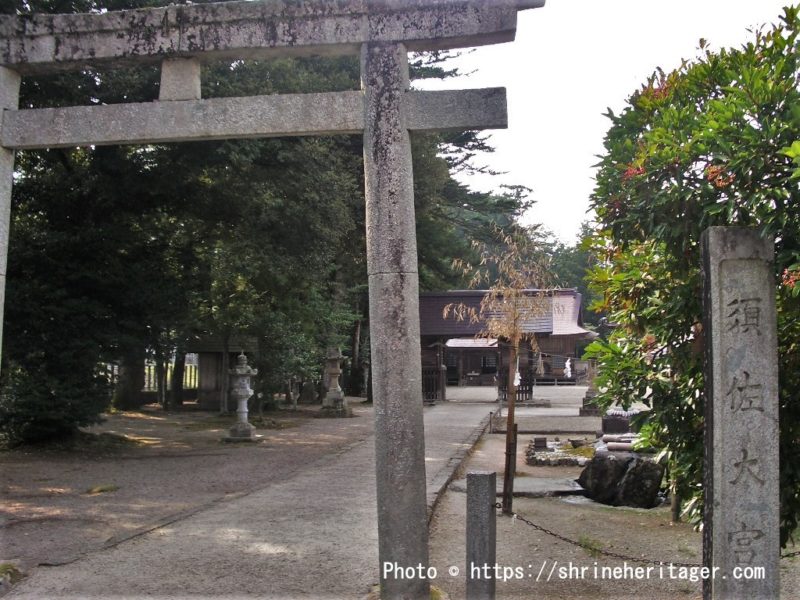 After the bow, we went through the torii gate.
Direction The stone-paved approach extends straight in the dry (northwest direction)

There is a "rock water bowl" on the right hand side, and it cleanses. 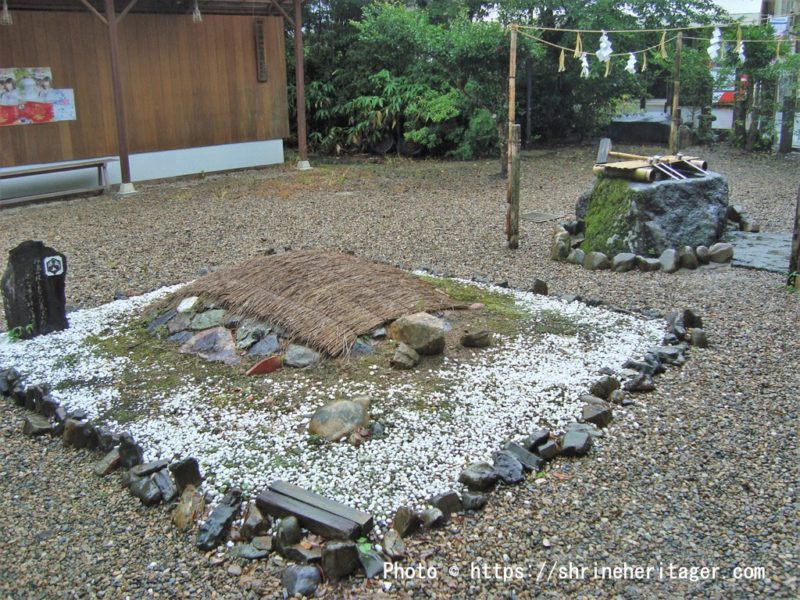 If you go along the stone-paved approach, you will see "Worship Hall" in front of you when you go through the pilgrimage gate and go through the shrine with the "Lord Suijinmon" Toyokuma Togami and Kushikuma Togami. 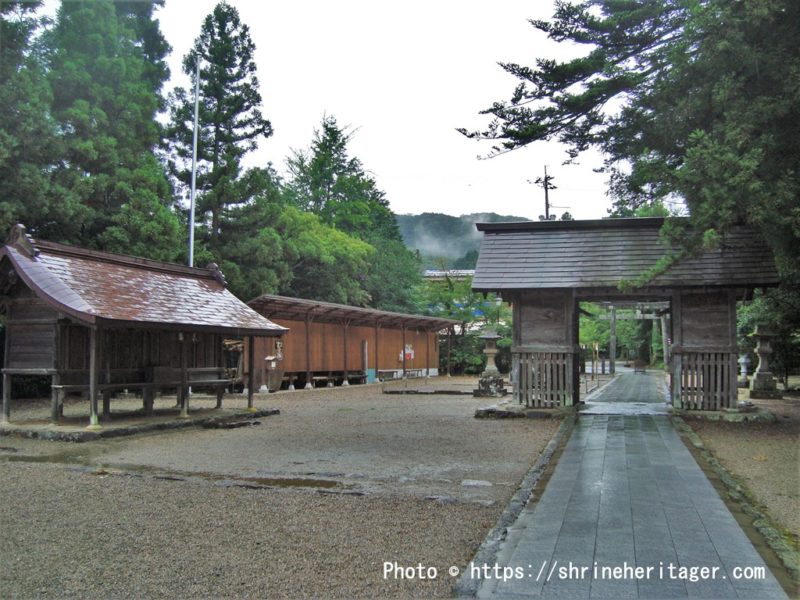 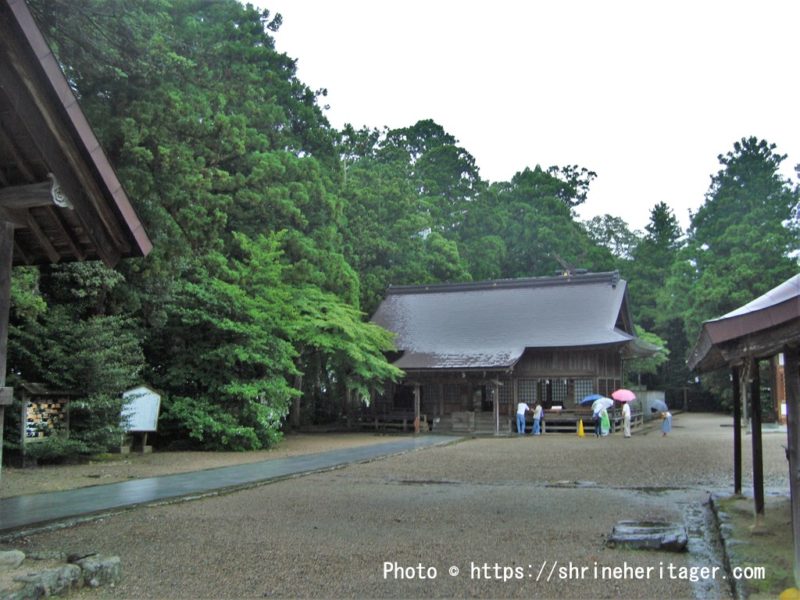 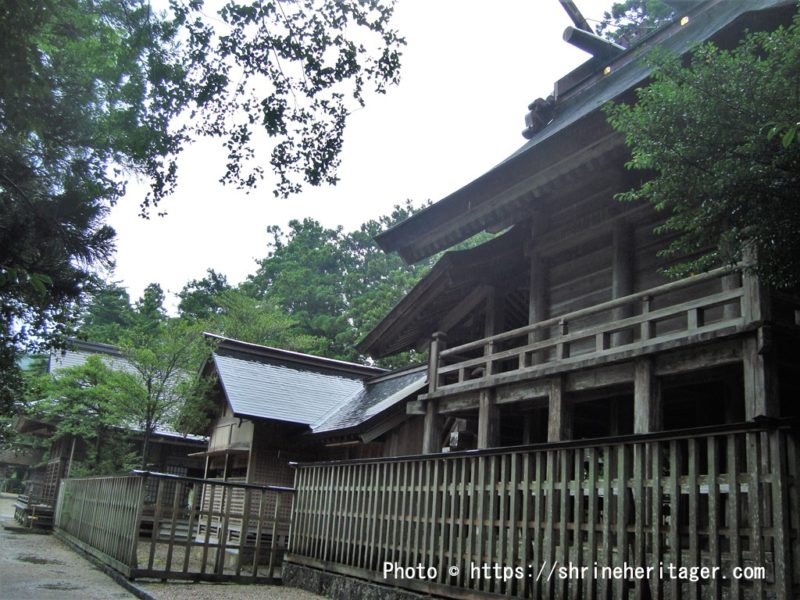 Go to the shrine.

I'm sing a
lot of money. I wish you all the best. I pray with my hands together while praying that I will be able to reach the enshrined god who calms down the Izumo-kuni and will be able to live up to the god of god. 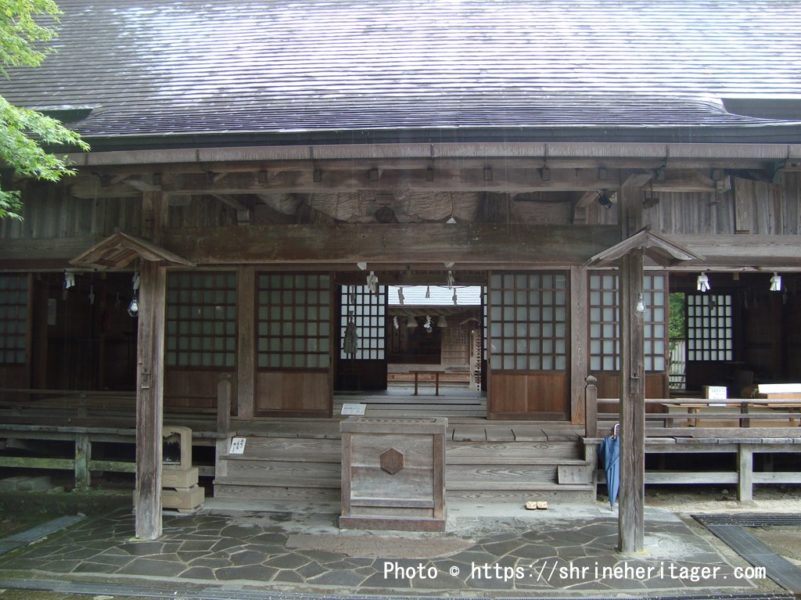 In the rear is a splendid main shrine built by Taisha. 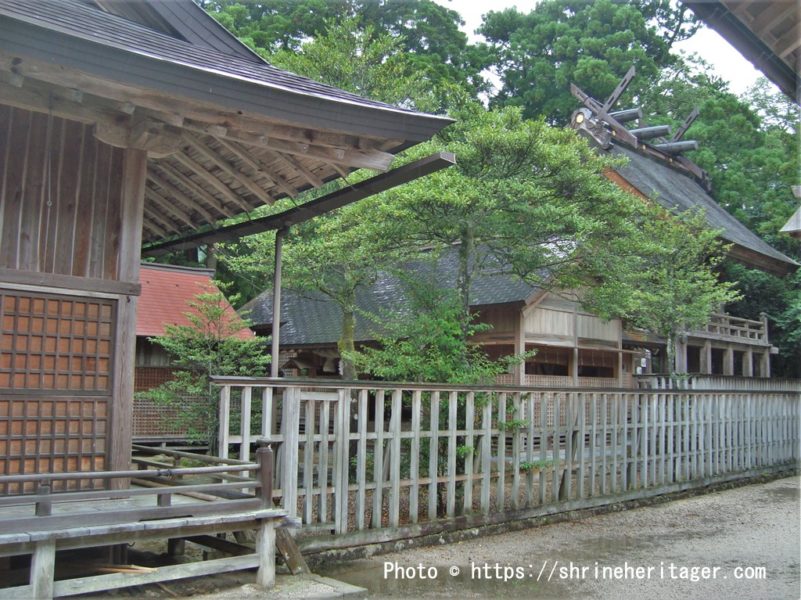 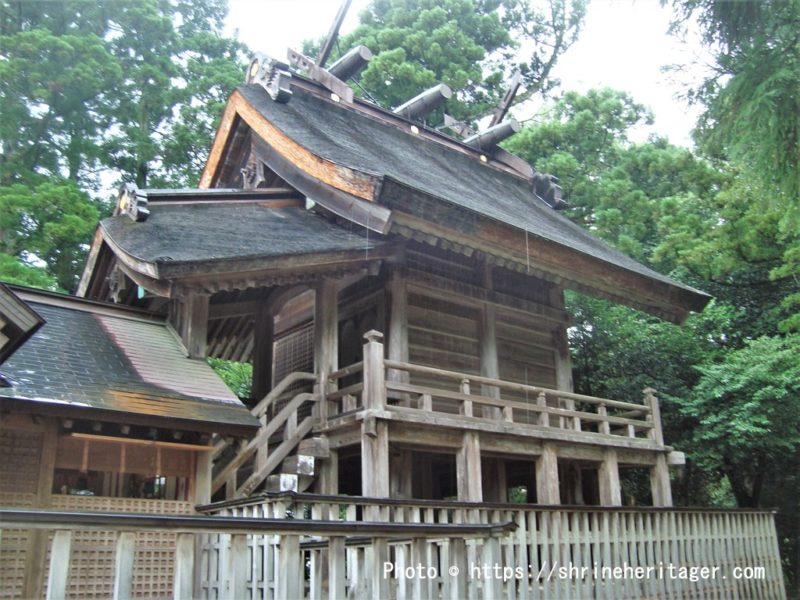 Then, it is a visit to the precinct shrine.
"Onita with a god crest" which was once in the shrine hall

On the right, along with "Office" and "Inarisha" 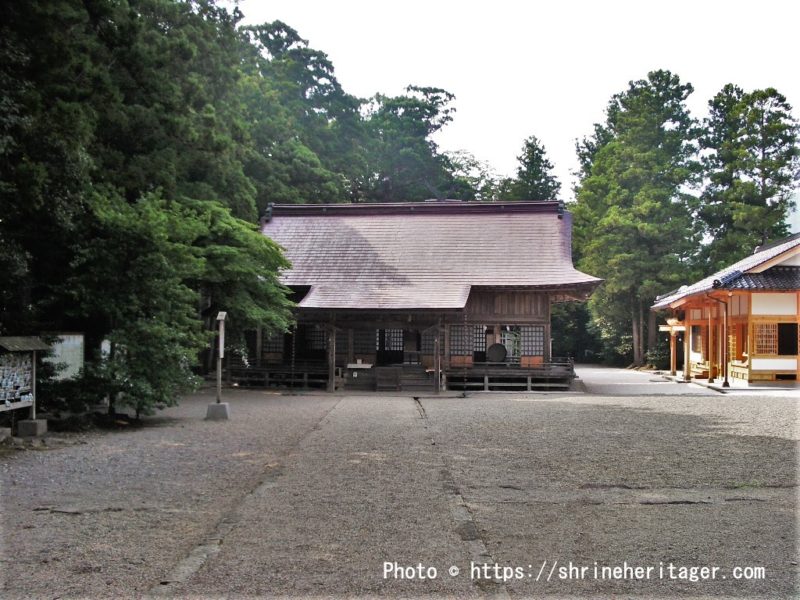 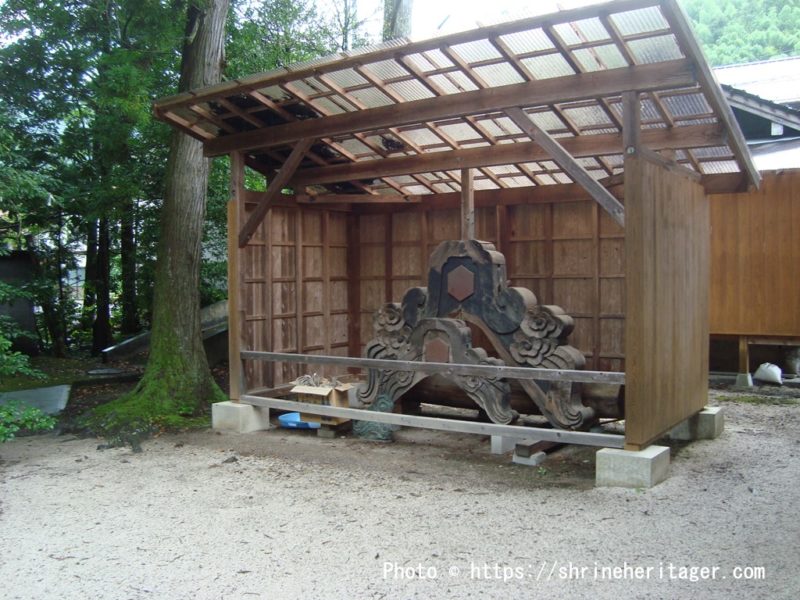 "Osugi" and "Aioi no matsu" in the back of "Gohonden" 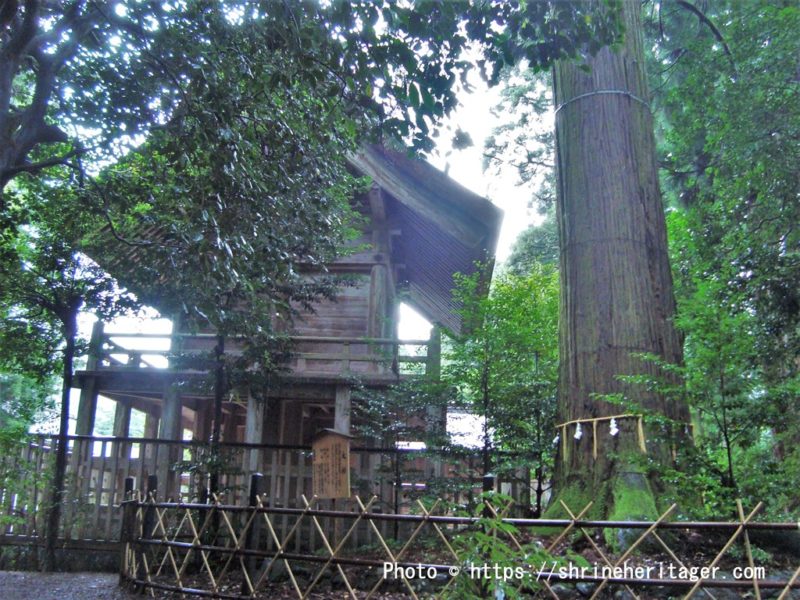 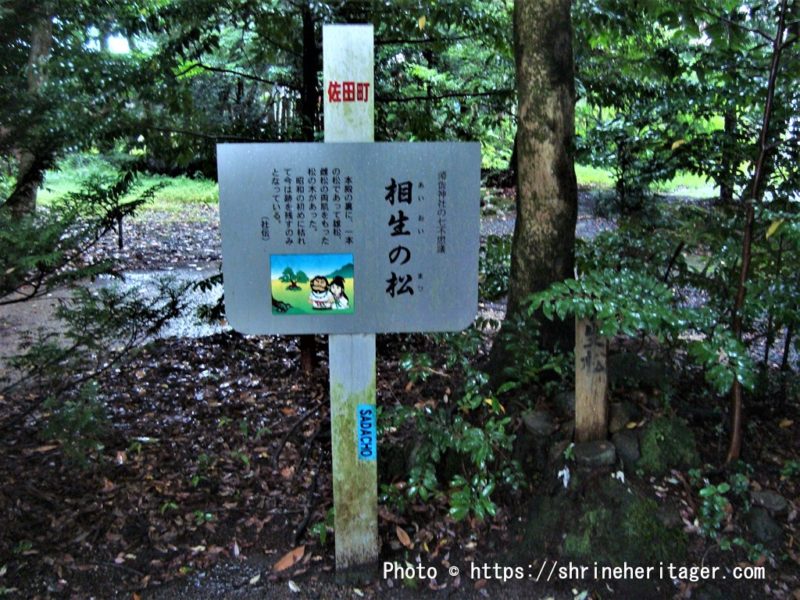 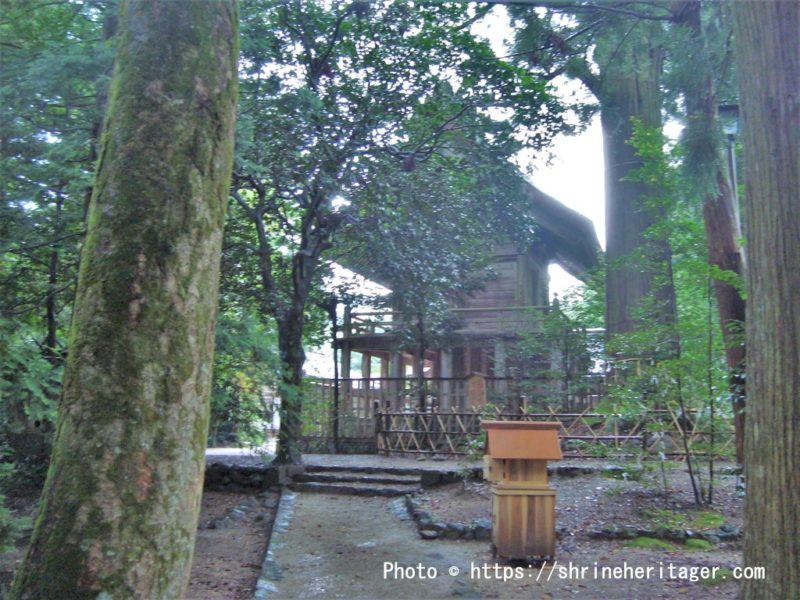 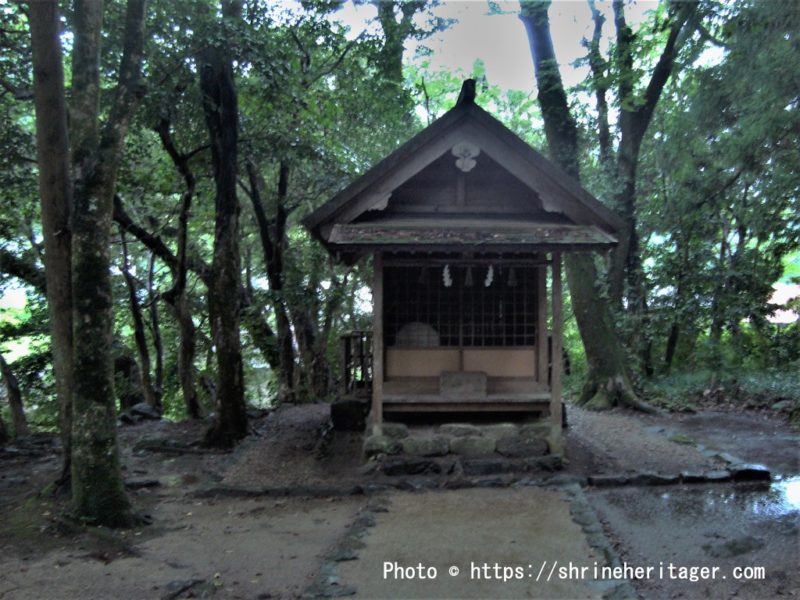 When you return to the front of the shrine, there are "Tosuesha" and "Nishisuesha" on the left and right sides of the approach, and each of them faces across the approach. 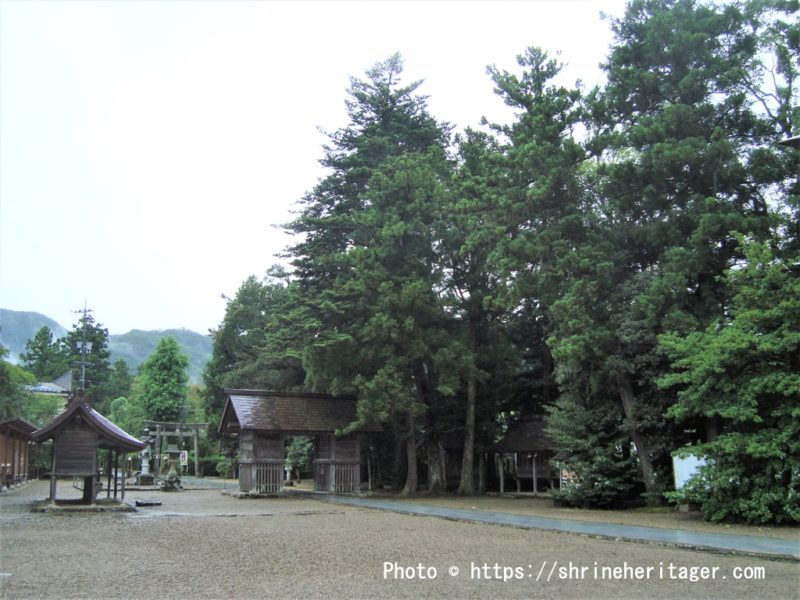 Back on the approach to the gate, face the front of the precincts at the end of the torii gate, and there is "Amaterasusha" called "Gozen above" facing the head office, and it is built in the direction of inui (northwest direction) toward the head office. 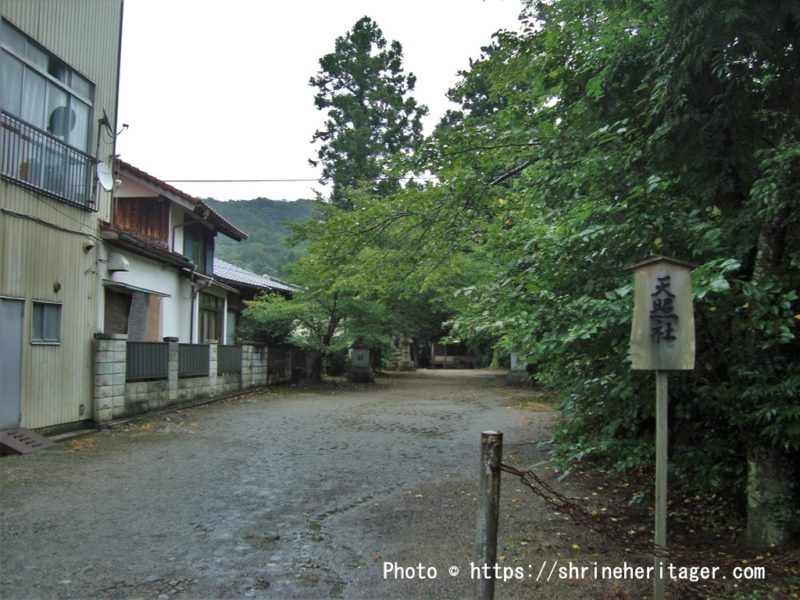 Behind "Tosuesha" is shionoi (shio no i), one of the seven wonders. 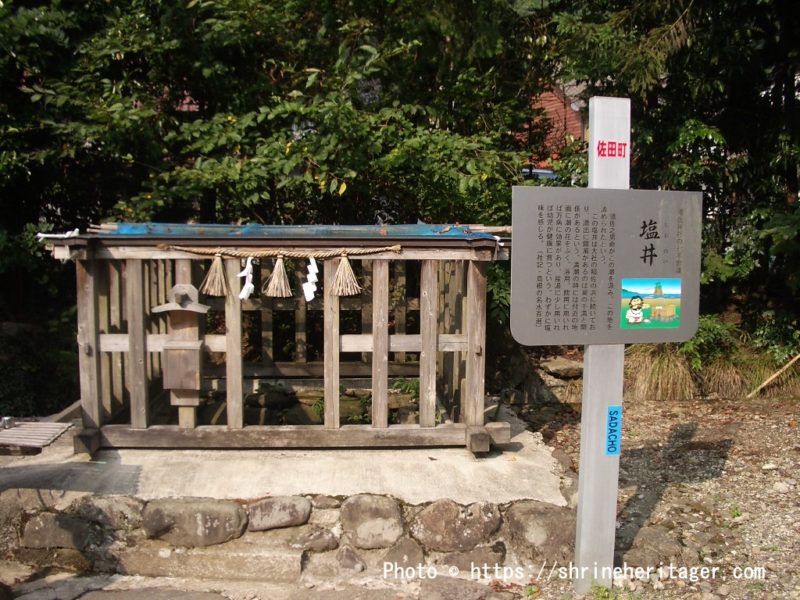 I didn't notice it at all, but it was surrounded by the shrine in the precincts from all sides, and in the center of the shrine, "Sando" and "Suijinmon" passed through, and it passed through here and it was visiting the god of worship.
I'm convinced that the arrangement of this precinct is probably something that is calculated.

Return the approach, pass through the Sui Jinmon Gate, go through the torii gate, and bow. 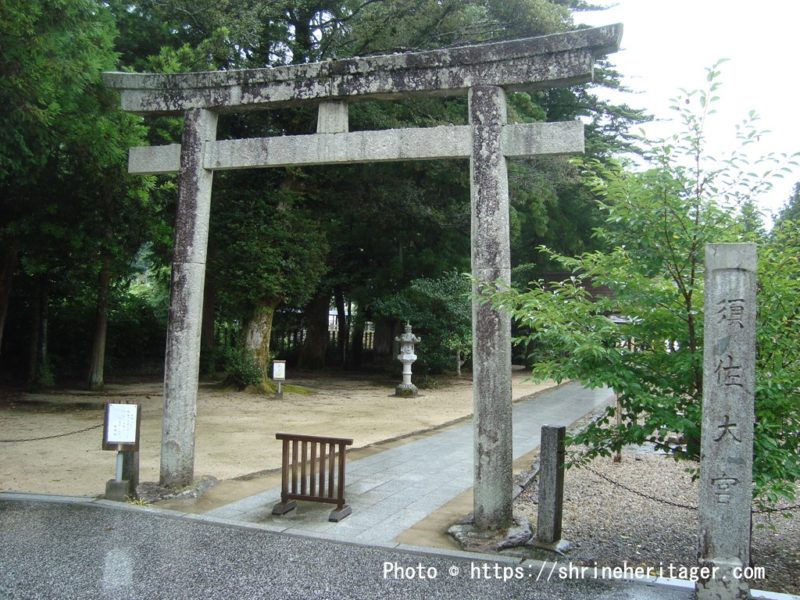 (Translation)
Susa-go is located in 19 west villages of the County Family.

Kan susanoo no mikoto said, "This country is small, but it's a good country, so I'll put my name on the land without a tree or stone."
The soul of life was subdued here.

And, there is Masakura in this village called "Susa" because it was decided "Ousada" and "o susada" was decided.

There is a similar tradition in the shrine's company biography.

In the old days, The Village of Susa was a mountain that was a leafy mountain, and it was only a cold village with a cat's forehead arable place in the river.

It is said that Susanoo's life pioneered the countries, came to the land of Susa, and the last national land management was done, and "This country becomes a small and both good country, and my name is put on the land without putting my name on the plant" It is seen in the old book that it is Susan because it was decided. 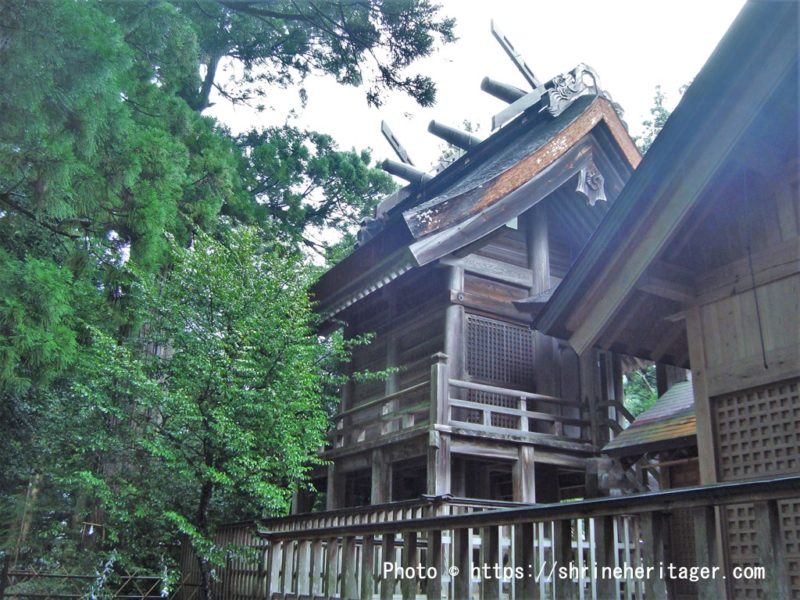 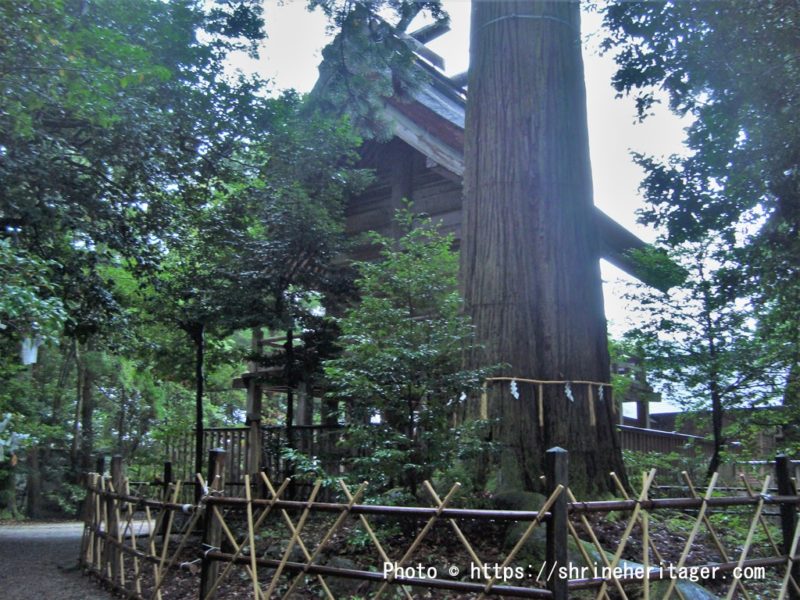