【出雲國風土記（izumo no kuni fudoki）所載社（Place of publication）】
The shrine record was completed in February 733 AD. 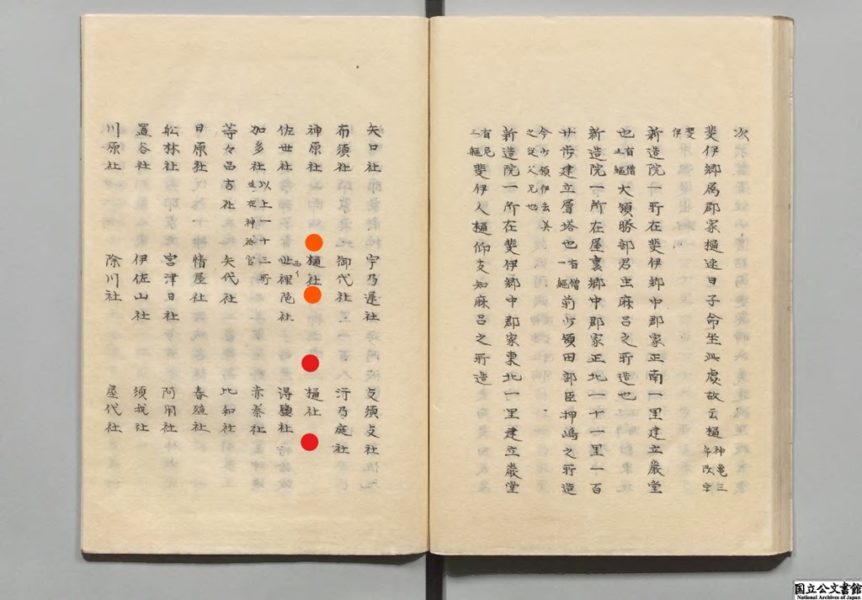 【延喜式神名帳（engishiki jimmeicho）所載社（Place of publication）】
The shrine record was completed in December 927 AD. 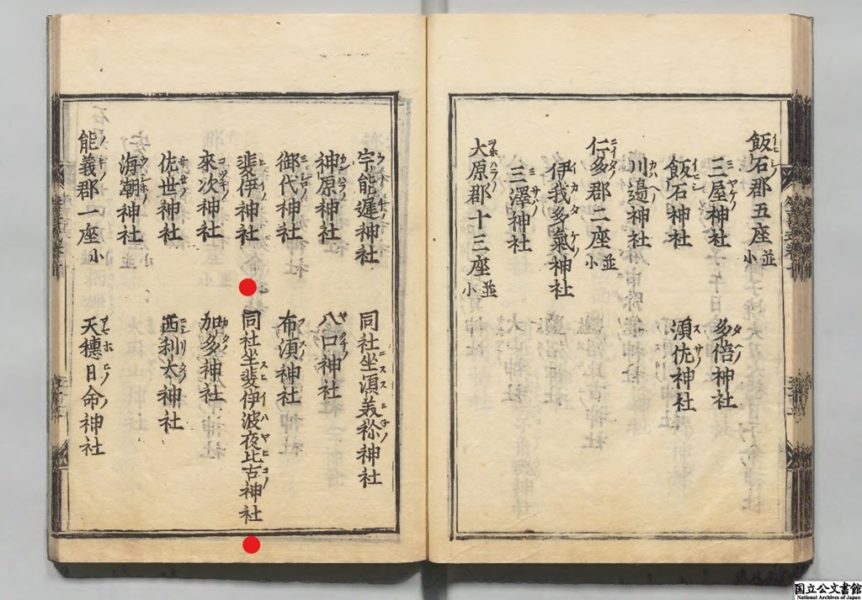 神代
Shrines are very old, from the days when the gods flourished. And the Death Is Still Going on

It is said that the present cedar was planted after the flood in 1873.

Hachihon sugi is said to have planted eight cedars on top of it, burying its eight corners so that the large snake (orochi) would not come back to life and harm people after Susanoo no Okoto exterminated the Yagi Great Serpent. 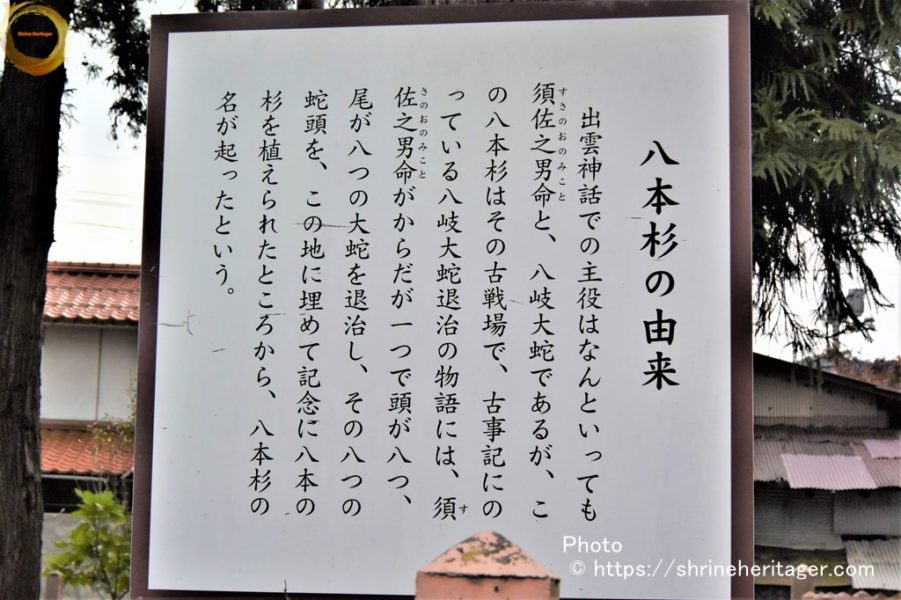 From the two guide boards

The origin of
the hachimoto cedar The main protagonists in Izumo mythology are Susa no Omoto and Yagi Daija.

This Hachimotosugi is the old battlefield, and in the story of the Yaki Great Serpent exterminating on Kojiki, Susao's life (Susa no Monoto) is one of the head with one, and the tail exterminates eight large snakes,
It is said that the name of the eight cedar occurred from the place where the eight snake heads were buried in this ground and eight cedars were planted in commemoration.

Hachimoto cedar, a place derived from the legend of the Yagi Great Serpent
Susanoo life is a place where eight heads are buried here and cedars are planted on it so as not to exterminate the great snake of Yagi, to come back to life, and to harm people.
And, it is a place where poetry is enshrined as 'the cedar starving of the grace of the person who is ours, and the generation of the end which defends Yaegaki or Kokomi'

From the two guide boards

【境内社】(Other deities within the precincts) 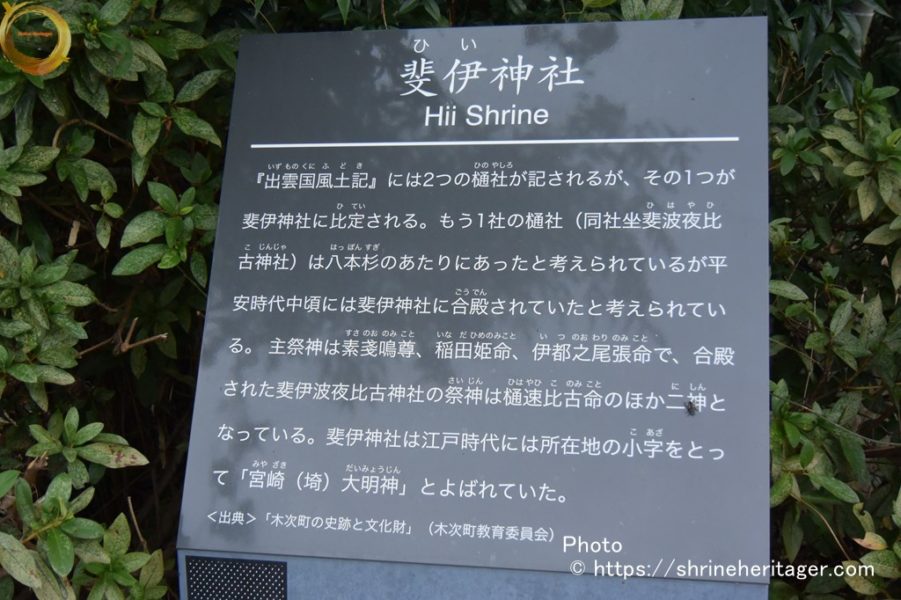 In Izumokuni Fudoki, two shrines are written, one of which is compared to the Aoi Shrine.

Another company, Hiyakojija Shrine, is thought to have been around Hachimotosugi.
It is thought that in the middle of the Heian period, it was held at Goden Shrine.

The main deities are Susanoo-no-Mikoto, Inada Hime-no-Mikoto, and Itono-Owari-no-Mikoto.
The deities of the Hii Inami Yabiko Shrine, which was enshrined in the shrine, are two gods in addition to Hihaya Hikono Mikoto.

In the Edo period, the shrine was called "Miyazaki (Saitama) Daimyojin" by taking a small character (koza) in its location.

Source: "Historic Sites and Cultural Properties of Kigi Town" (Kikimachi Board of Education)

Guide board in the precincts of Aoi Shrine

From the precincts of hii shrine (hii shrine) to the west over the railway line 150m on foot, you can see the tall cedar tree "hachihon sugi". 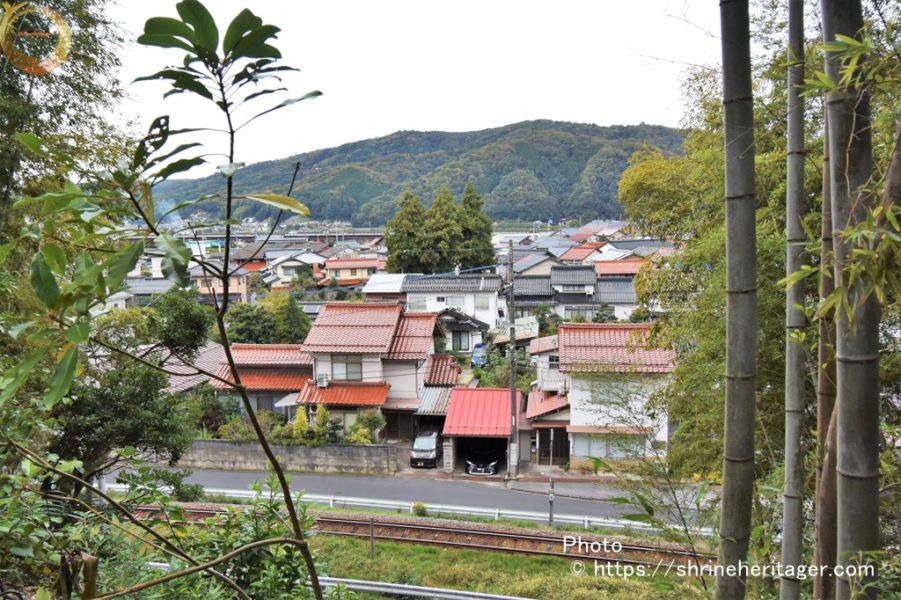 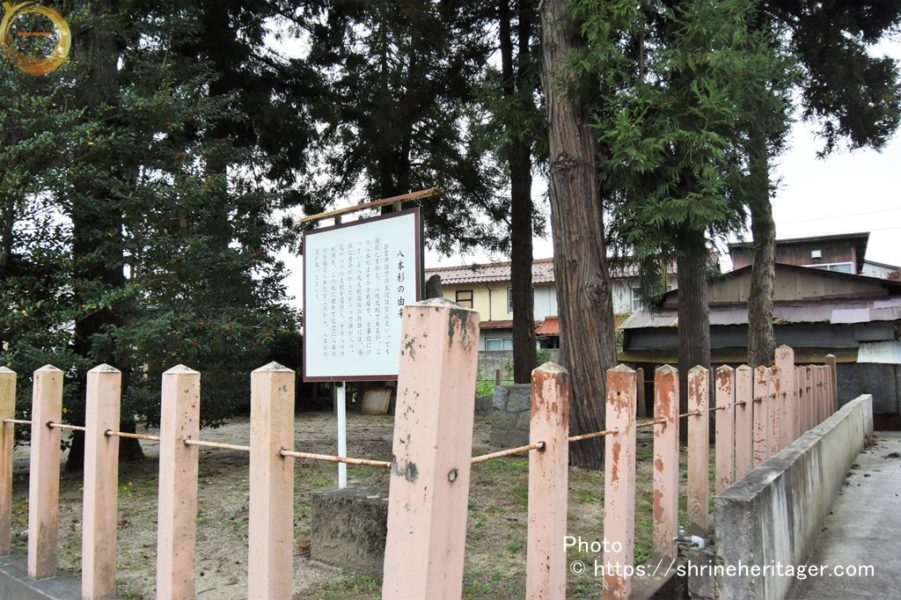 Hachihonsugi
is said to have been washed away by the flooding of the Aoi River many times since then. It is said that the present cedar tree was planted in
1873. Because it is an old shrine site of the shrine, a torii gate is built, and a stone monument which shows the eight cedars is built. 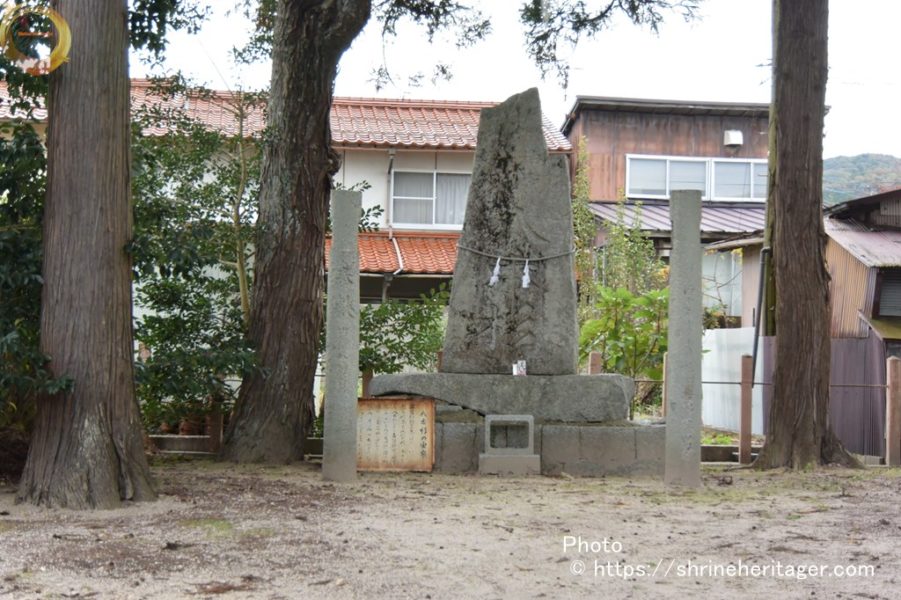 The eight cedar large trees planted in an orderly order around the stone monument are in the th home, but they are a mysterious space. 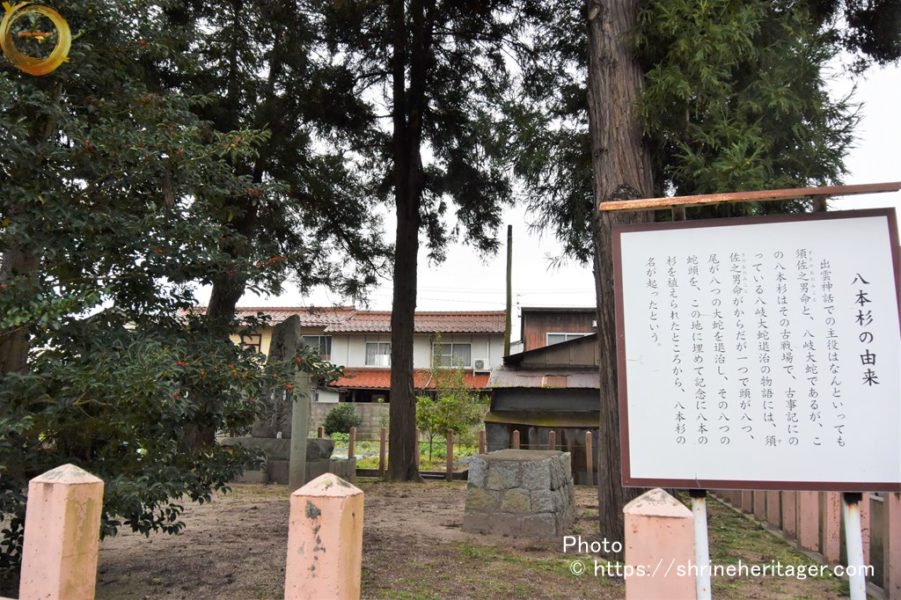 Hiya Hito no ikoto is sitting here,
, so it's called hi.

In the third year of Kamigame, I changed my character to hi. 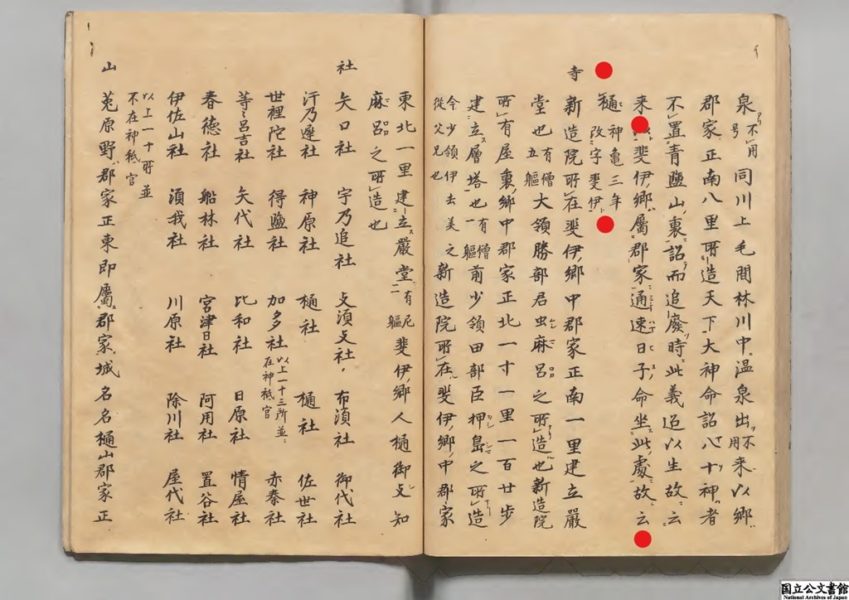 a
translation of one's intention "Hisago Satochi Hachimotosugi"
I buried the "eight horns" of the Yamata no orochi.

From The Gods, the
Cedar of the Shinshiro The old man tells us that the song that Susanoo no mikoto sang at the time when eight cedars were planted

"The cedar of the grace of the person who looks at me is hungry, and Yaegaki is the last generation to protect it"

It flowed in the flood in 1633, and the cedar of the god generation withered, and it re-planted, and eight kakusugi (tsunosugi) now are in Tanaka of the soho. 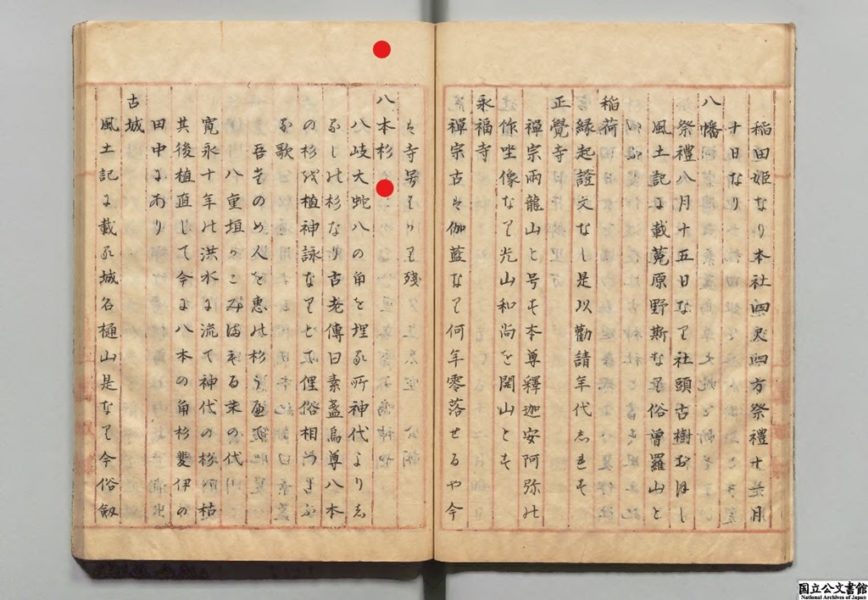 It is the place where "eight
horns" of the Yamata no orochi (yamato no orochi) was buried, and it became a cedar of the signs from Kamishiro, and it is the former sitting ground of "hi no) yashiro" written in "Izumo no kuni fudoki" 八岐大蛇（yamata no orochi）の「8つの角」を埋めた所なり