It is Awashima Shrine (Yonago City). In mythology, it enshrines "Sukuna hikona no mikoto", which is said to have been flipped by the stalk of millet and passed to tokoyo. The summit of Awashima, which climbed through the long stone steps covered with trees, wears the brilliance of the sky and gives off "unusual godliness." Perhaps this sanctuary is a space that leads to "the land of the eternal world." 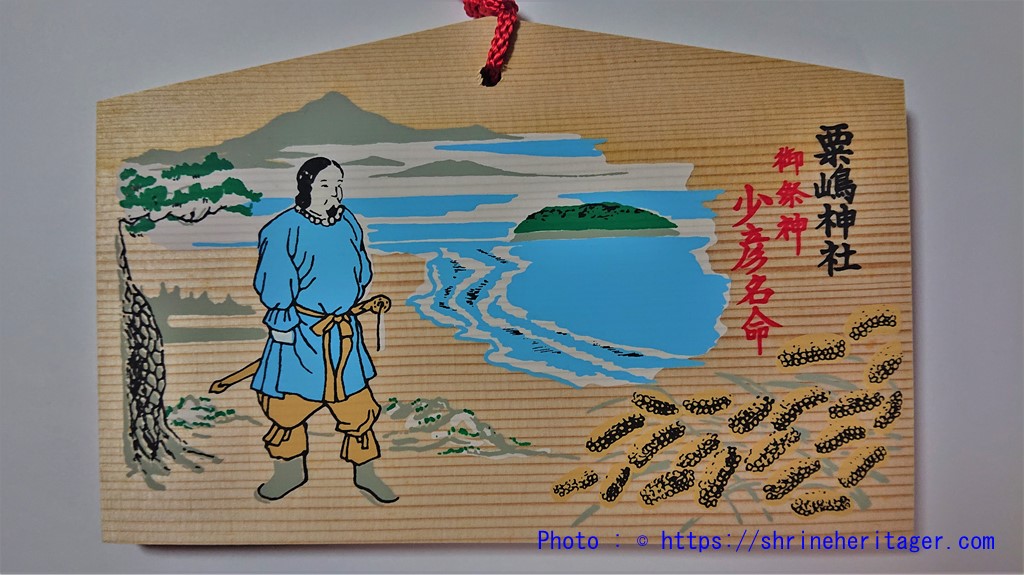 Shrines are very old, from the age when the gods flourished
And the faith is still going on 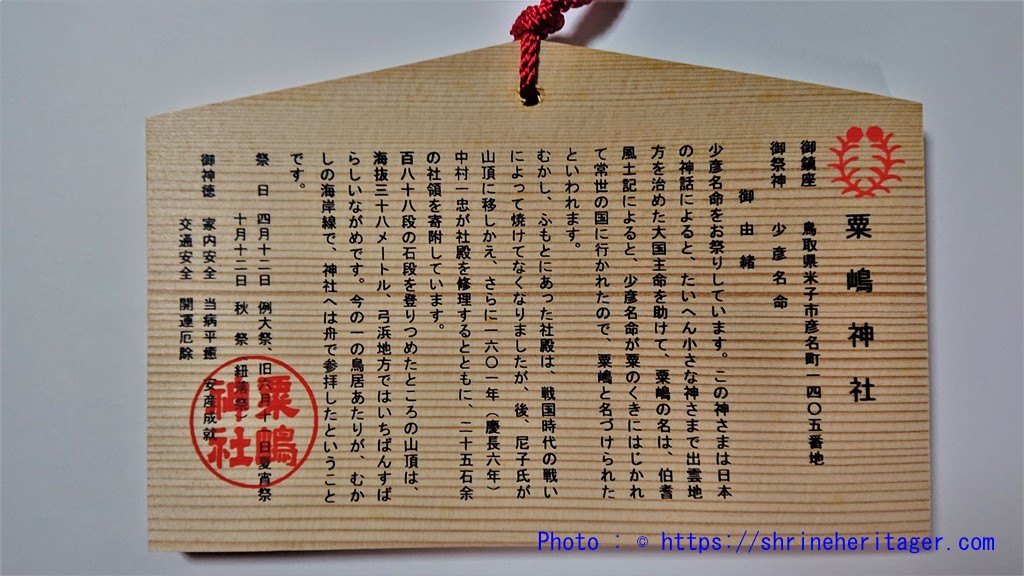 【境内社】(Other deities within the precincts)

【この神社の予備知識】(Preliminary knowledge of this shrine)

The enshrined place is the place name "Yonago City Hikona-cho", and tells the very reason for enshrining the festival deity「少彦名命sukunahikonanomikoto」
Because, it is a ground where The Great Life of Shiko arrived from "the country of the world" to "this world", and it is a place where it returned to "the country of the world" and that is, a place with the legend of going back and home.

There is a small shrine called "Oiwagu Shrine" in the precincts
This is the place where the famous Shiko was arrived in Awashima by boat and landed first, and it is considered to be a very sacred place.

"Awashima, Aimi county.
There is Awashima which has the village of Amaribe in the west north of the county office.
When The Great Life of Shiko sowed awa and came to fruit, it was shot in the awa and went to the country of the world, hence Awashima."

It is written that there is a similar myth in "Nihon Calligraphy", and that Sknaviconanomikoto was played by awastalks in Awashima (Awashima) and went to the ever-world.

There is no doubt that the landing place of The Famous Life of Shiko is an important point of the festival god among some candidate sites, alcause it is only said in "Kojiki" that "it appeared on the cape of Miho".

Awashima is now on land with Yonago, but it is said that it was literally a small island floating in Nakaumi.

Since ancient times, the beautiful island in the Nakaumi has been the object of people's faith.
In the Edo period, worshippers crossed over to Awashima in a boat and there was a dock with a wage of 3 sentences "3 sentences passed". 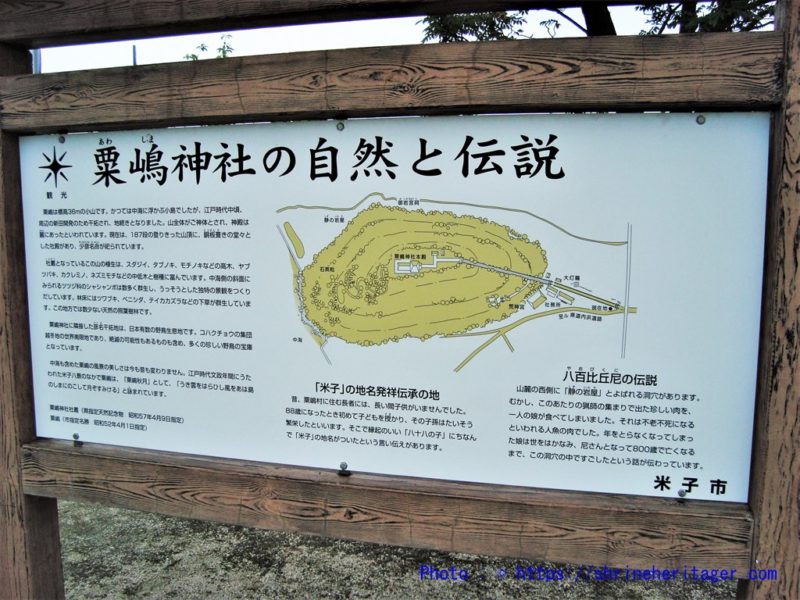 Go through the torii There is a hand water house on the right side of the approach to cleanse
On the left is a shrine office, and there are also terrings and edas of the famous Shiko life, etc., and you will be awarded while listening to various stories to the priest.

In addition, it is a signboard of the venerable at the end of the left hand 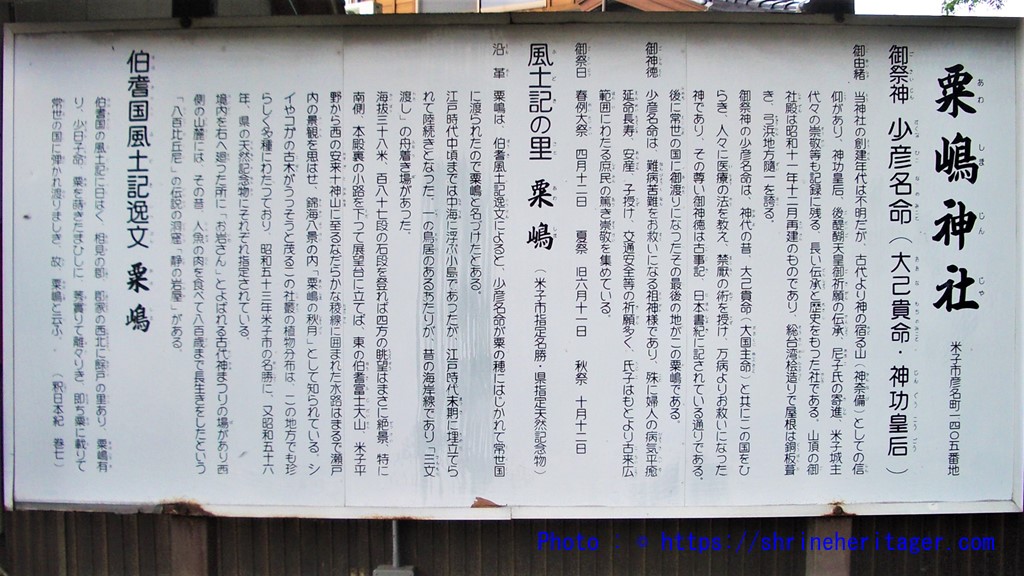 If you go through the second torii gate as it is, there is a small hill 38 meters 38 meters from the sea level now that was a former island.
You will look up at the 188 long stone steps that follow the top.
There is also a coin box for those who visit at the foot of the mountain. 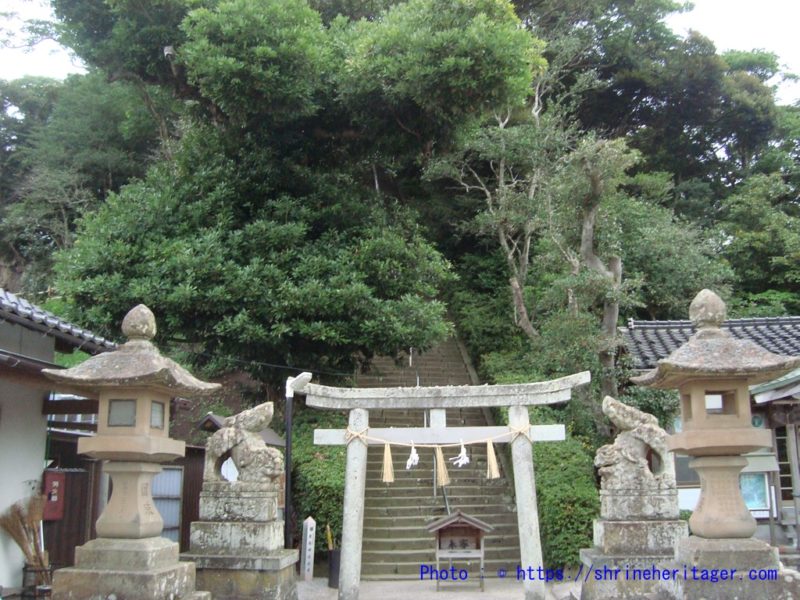 When you climb the stairs pleasantly, there is a zujinmon gate, and the god who sits worships the statue of the god "two pillars of combing rock window and Toyokushi rock window"
Continue to haiden main hall

When you pass through the Suijinmon Gate, the air in the precincts is clearly different.
Perhaps this divine area is a space that is well-undersuted in the "land of the world"? I feel that 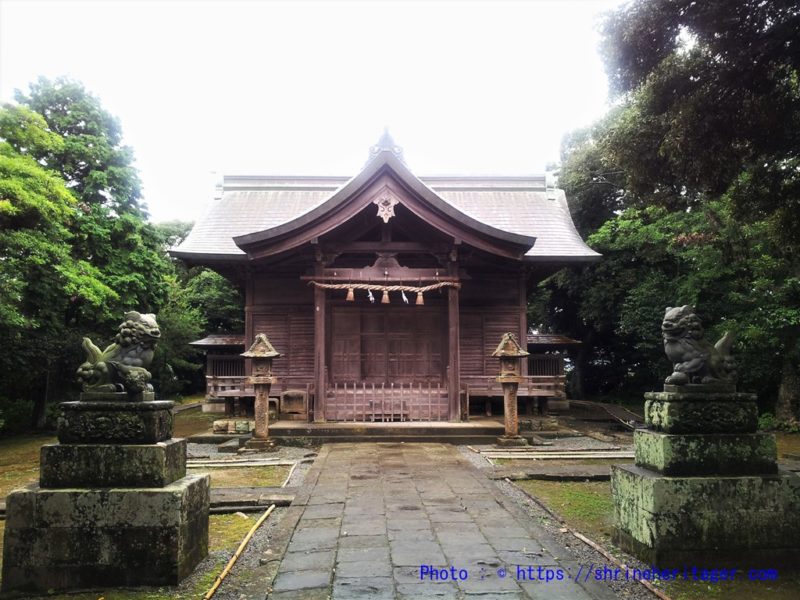 I pray while praying that I will not reach the god of gods that will be calmed down, and that I will do a high kashiwa hand and accompany Kamiwei.

I tried to get back on the approach.
If you go behind the main shrine, there is also a far worship place to Izumo Taisha and Ise

From there, if you go back, there was a superb view of "Nakaumi" where you can take your breath away.

It is also called "Akitsuki of Awashima" and "Kinkai Hakkei" as scenic spots.
Nishikiumi shines from the summit of Awashima reflecting the falling sun. That's it.

The old name of Nakaumi today is "Nishikikai", and the divine view from the island where God dwells is indescribable. 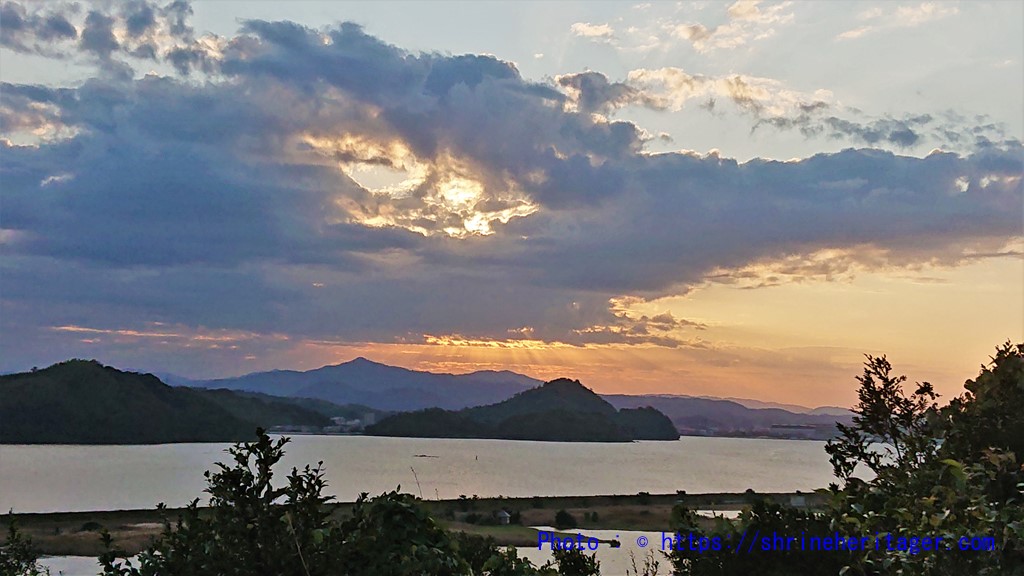 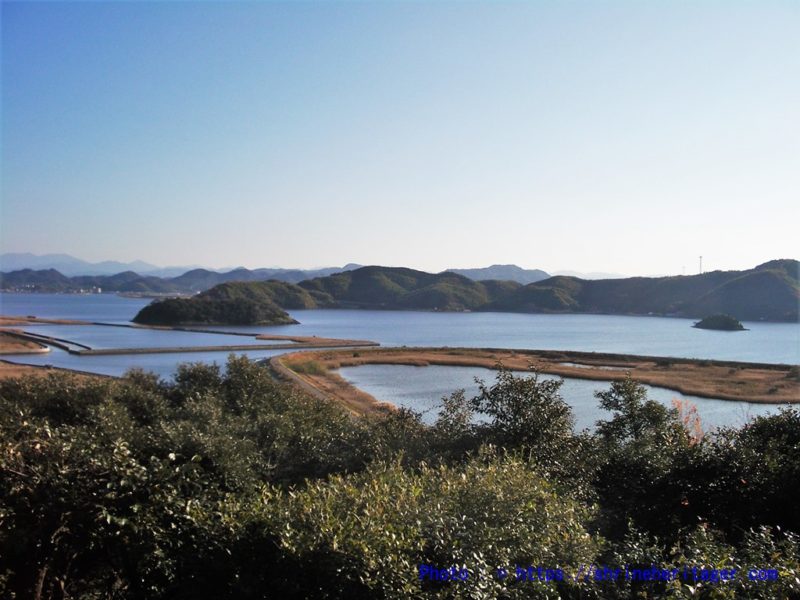 Slowly down the long stairs of Omotesando
There is a shrine with a 蝮 name called "Ara Jingu 蝮Jajin Shrine" in the middle, but the festival god is Susanoo Okami
It may be enshrined in the middle of Awashima to calm this island, or the whole Awashima is a snake god body wrapped around a toguro 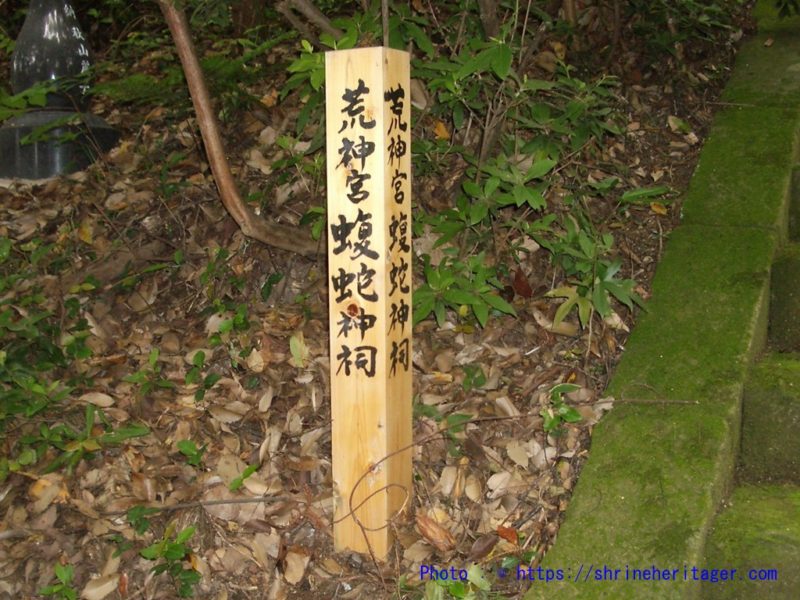 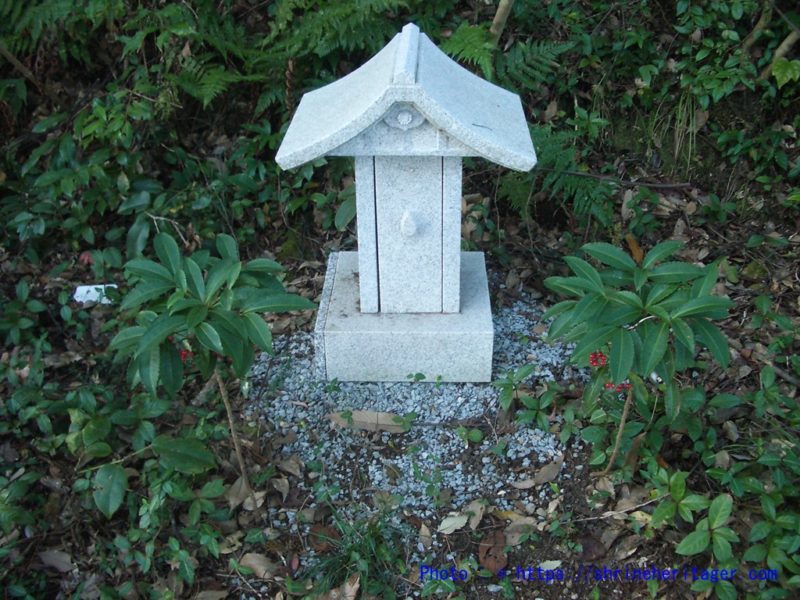 If you get off the stone steps of the approach and go around the foothills of Awashima,

・ There are "Shrine" and "Iwaya" of "Shizu no Iwaya" (Shizuno Iwaya) 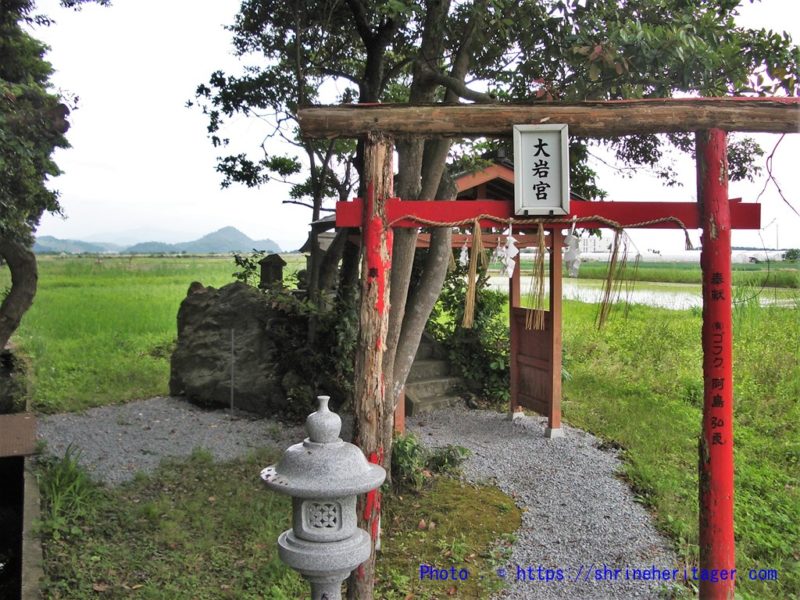 As I introduced earlier, it is said that the famous life of Mr. Shiko arrived in Awashima by boat from "The Land of the Everssei" and landed first, and it is called "Oiwa-san" and is considered to be a very sacred place.

According to the information board:

"This Oiwa, called 'Oiwa-san', has long been believed by ancient people who believed that God would come from the sea as 'the first rock that God arrived at from the sea was hugged first', that is, "God's yoyo". The rock is the same as the stone, and the stone can be read as "seki", so there are many people who come as gods that work well with the wind and seki, and since ancient years, it has been a god who has been indestively ill, and there are many records of the dedication and dedication as a thank you for the fulfillment of a full application."

If you go further,

According to the information board

"In the past, there were 11 fishermen around here, and as the 60th son of Awashima Shrine, they held a "lecture" gathering once a month. One time, a fisherman moved in and asked me to join him.

A year later, when this fisherman was on his turn, he put everyone on a boat to thank him for his gratitude so far, and guided him to a splendid palace like Ryugu.
When I returned a few days later, the mermaid dish (meat) was served as the best treat, but everyone was creepy and did not eat it, and I hid it in the front and tyed it to the sea on the way home.

However, a fisherman forgot to throw it in the sea, so the 18-year-old daughter of the house found her father's kimono when she folded it and ate it without her knowing.

After that, it is said that the daughter became the body of immortality, did not grow old no matter how many years passed, and remained an 18-year-old daughter no matter how long she left, so she rather became a nun, entered this cave himself, ate dried persimmons, and died while ringing 鉦.

At this time, because daughter's age was 800 years old, villagers said that this was treated, this daughter was called 'Yappihioka nun' (Happyaku-haku-san) or 'Yahihime-san' (Yahime-san), and it was secretly enshrined.

We still have a wide range of faith in the benefits of longevity."

And what a sad iwaya legend is written

There's also another tradition in this iwaya.

"The Song of Masato Oishi Village (Oishinosgri Mahit)
The iwaya of Shitsu, the name of Shouhiko, has been wet for many years."

(Iwaya in Shito, where the great country lord and the famous Life of Shiko lived, must have passed for many years.)

By the time of the Manyo collection compiled at the end of the 8th century, it was a famous place for tokyo people to know.
While enjoying the sense of time slip, go through the torii gate and thank you for bowing

Empress Shinko (empress of the 14th Emperor Nakae) and Emperor Go-Daigo (the 96th Emperor and the first Emperor of the Southern Morning) are also said to have visited the shrine.

"Awashima Shrine" has "Gojinwei" that you want to visit again 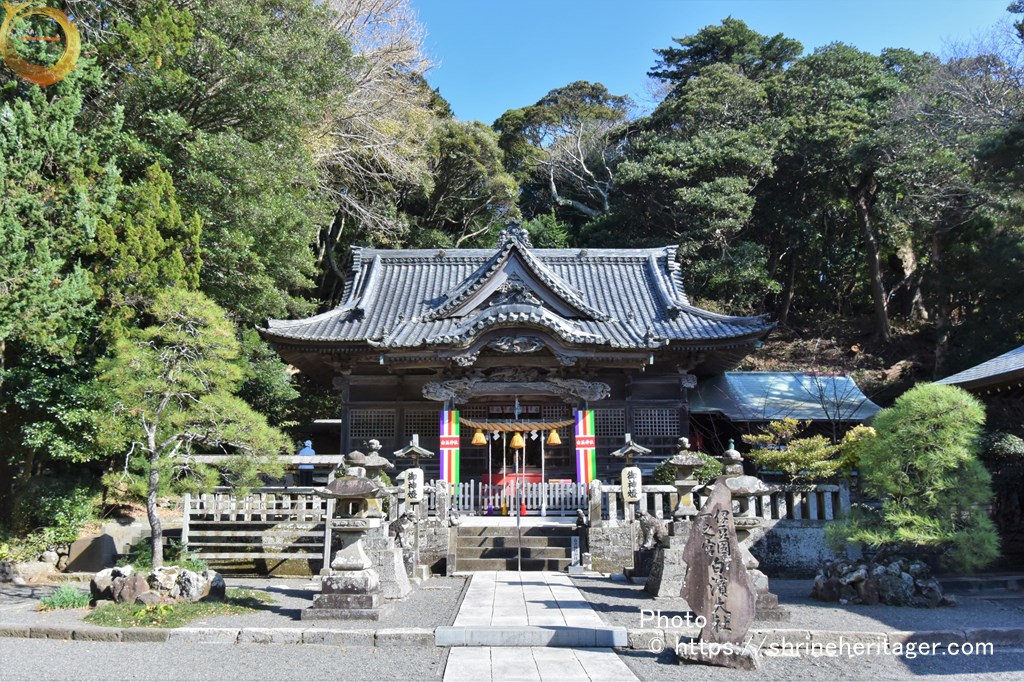 Ikonahime no mikoto shrine, according to the good luck of the shrine, "This god is transferred here from Miyakejima, and it will be transferred to Mishima later", and the pioneer god of izu islands "Mishima-jin - Mishima-jin" and the empress god "Ikonahime no mikoto" The hill "hitachiyama" on the Shirahama coast of the jinzachi area is a ritual site that enshrines the Izu Islands since ancient times, but the rituals of Ikonahime no mikoto Shrine are still continuing. 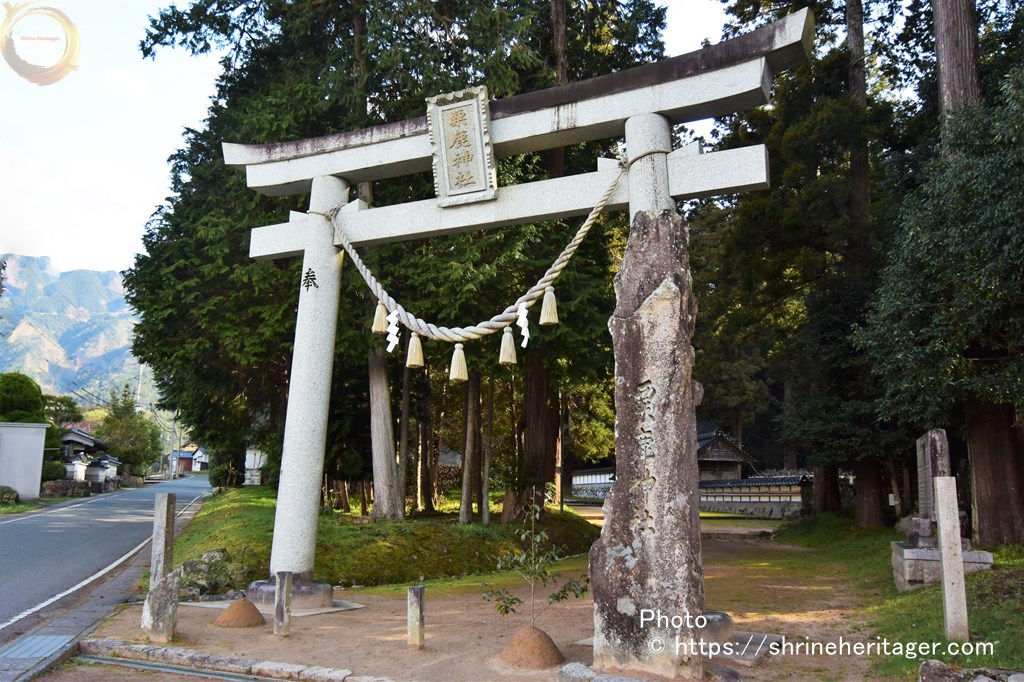